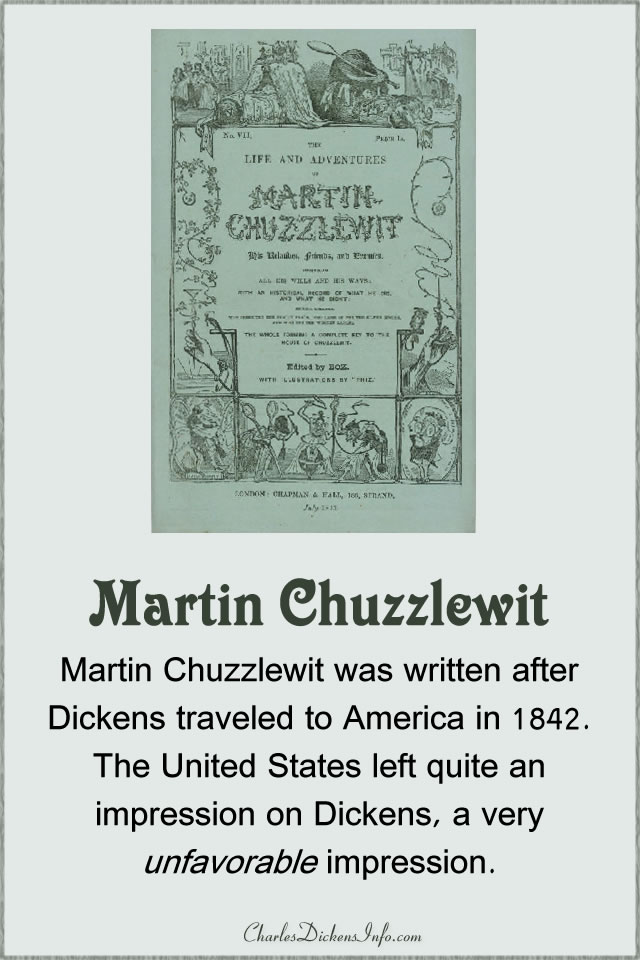 Martin Chuzzlewit was Dickens’s sixth novel.  It was first published by Chapman & Hall in installments that began in January of 1843 and ran through July of 1844.

In January of 1842 Dickens and his wife, Catherine, sailed for America.  They returned to England in July of that year.

American Notes was published in October of 1842.

Late in 1842 or early in 1843 Dickens began work on Martin Chuzzlewit.  The first installment was printed in January of 1843.

Dickens began work on A Christmas Carol in October of 1843.  It was published during the holiday season of that year.

In July of 1844 the final installment of Martin Chuzzlewit was printed.

In 1867 Dickens returned to the United States for an extensive reading tour. 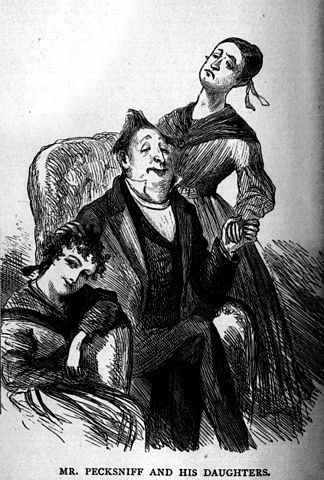 The overriding theme of Martin Chuzzlewit is selfishness, selfishness of all types.

The elder Martin Chuzzlewit is a very rich man.  When he appears to be near death the worst comes out in those around him.  Pecksniff tries to scheme his way to the Chuzzlewit fortune.  The vulture-like Chuzzlewits and Spottletoes sweep in to wait for the old man’s death.  All of them hoping for an inheritance.

However there are other types of selfishness.  Young Martin Chuzzlewit is arrogant and oblivious to the feelings of others.  He takes Tom Pinch and Mark Tapley for granted. 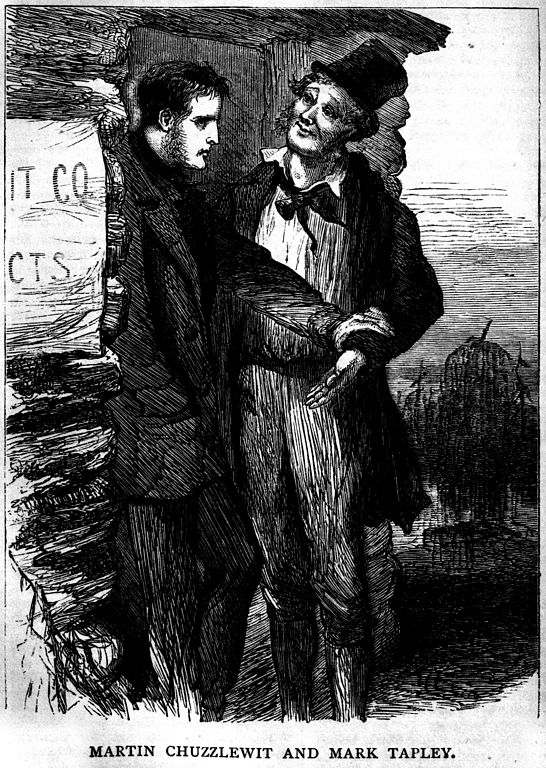 Later in the novel, continued exposure to Mark Tapley and a change of fortune in America bring out the better side of young Martin’s character.

At the end of the novel the elder Chuzzlewit states: 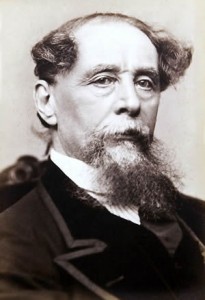 Martin Chuzzlewit was written after Dickens traveled to America in 1842.  The United States left quite an impression on Dickens, a very unfavorable impression.

Dickens was horrified by slavery, appalled by the common use of spitting tobacco and indignant about his treatment by the press.  Like any good author, he used his life experience in his work.  His dissatisfaction with America came out in American Notes and later in Martin Chuzzlewit.

As Washington may be called the head-quarters of tobacco-tinctured saliva, the time is come when I must confess, without any disguise, that the prevalence of those two odious practices of chewing and expectorating began about this time to be anything but agreeable, and soon became most offensive and sickening.  In all the public places of America, this filthy custom is recognised.  In the courts of law, the judge has his spittoon, the crier his, the witness his, and the prisoner his; while the jurymen and spectators are provided for, as so many men who in the course of nature must desire to spit incessantly. – American Notes

Schools may be erected, East, West, North, and South; pupils be taught, and masters reared, by scores upon scores of thousands; colleges may thrive, churches may be crammed, temperance may be diffused, and advancing knowledge in all other forms walk through the land with giant strides:  but while the newspaper press of America is in, or near, its present abject state, high moral improvement in that country is hopeless. – American Notes

An American gentleman  . . . likewise stuck his hands deep into his pockets, and walked the deck with his nostrils dilated, as already inhaling the air of Freedom which carries death to all tyrants, and can never (under any circumstances worth mentioning) be breathed by slaves. – Martin Chuzzlewit

Dickens returned to America in 1867 for an extensive reading tour.  He found the conditions in America greatly improved from his first visit.

In a postscript added to later printings of Martin Chuzzlewit Dickens shared a portion of a speech that he gave in New York in April of 1868:

Collection of Quotations from Martin Chuzzlewit 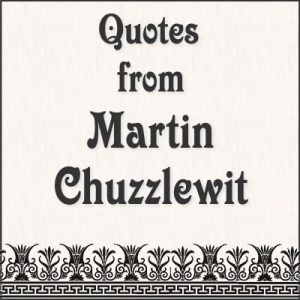