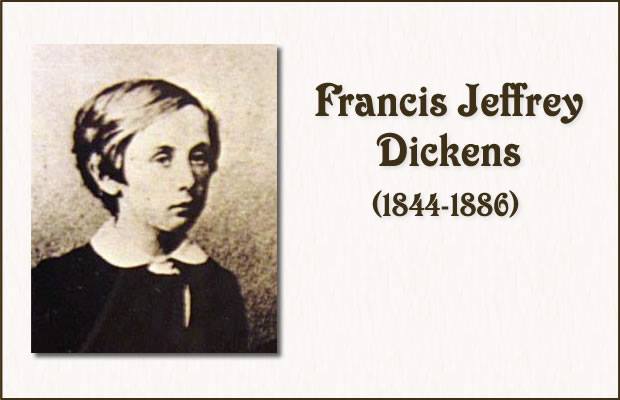 Francis Jeffrey Dickens as a child

Francis Jeffrey was the fifth child out of ten as parented by Charles and his wife Catherine. He was born in London, England January 15, 1844. The previous Christmas had seen the great success of A Christmas Carol. As was his practice Charles while playing with his children, gave them nicknames and eventually Francis Jeffrey would be called ‘Chickenstalker’ which carried hints of another Christmas book The Chimes.

The moneyed English tradition of sending children away to boarding school at an early age held true with Francis Jeffrey and he was sent to attend an English boys’ boarding school in Boulogne, France. Within a few years he was writing from another school in Hamburg, Germany where he was unsuccessful in studying pre-medical subjects. Upon return to London he was employed for a time with his father’s magazine. It was reported that Francis was a bit hard of hearing and had a stutter on occasion.

In 1863 Francis went out to India to serve with the Bengal Lancers. Upon his father’s death in 1870 Francis Jeffrey returned to England. Four years later he obtained commission as a Sub-Inspector in the newly formed North West Mounted Police and sailed for Canada. He arrived too late to participate in what would become known as The March West of the NWMP during the summer of 1874. However he was posted to Fort Dufferin near the 49th parallel for the winter of 1874/75.

During 1875 he was stationed at Fort Livingston on the Swan River (Manitoba) and then at Fort Macleod. Both postings necessitated long hours in the saddle traveling the seemingly endless parkland then prairie. The following year all of the Canadian and American Great Plains were in turmoil after the massacre of Custer and his men at the Battle of the Little Big Horn by Chief Sitting Bull and his warriors. Both countries were on war alert as the aboriginal peoples far outnumbered the whites.

The following year 1877 Sitting Bull moved into the Cypress Hills under the watchful eyes of the NWMP at Fort Walsh and Wood Mountain. Bull and his people would remain in Canadian territory for almost three years. During 1877 while stationed at Fort Macleod, Dickens was present at The Blackfoot Crossing for the signing of Treaty Number Seven with the Blackfoot Indians.

In 1878 Sub Inspector Dickens was transferred to Fort Walsh where he overlapped with Sitting Bull. In 1879 Francis Jeffrey was still at Fort Walsh and during this year his mother died and was buried in Highgate Cemetery, London. (His famous author father had been buried in Westminster Abbey). In November 1879 NWMP Constable Grayburn was murdered while attending to horses near Fort Walsh and this led to increased tensions in the area.

In June 1880 Dickens was promoted to the rank of Inspector and was transferred from Fort Walsh to Fort Macleod. The following year ‘Chickenstalker’ moved to The Blackfoot Crossing on the Bow River about 50 miles east of Fort Calgary. He was involved with at least one confrontation with a brave who had stolen a horse. This incident was settled by the wise intervention of Chief Crowfoot and the support of NWMP personnel who forced marched from Fort Macleod.

Dickens remained at The Blackfoot Crossing during 1881 and the first half of 1882 and was well aware that vast changes were about to occur in the country with the westward progress of the construction of the Canadian Pacific Railway. No longer would arduous, dusty route marches need to be made down to Fort Benton Montana Territory on the Missouri River to catch a paddlewheeler headed for Bismark, North Dakota to gain rail transport back to the east. During Dickens 12 years of service with the NWMP he never left the frontier.

In 1883 Dickens was transferred to Fort Pitt on the North Saskatchewan River and placed in charge of the small, poorly located fortification which lay on the main river highway supply route from Fort Carlton to Fort Edmonton. Ever since Sitting Bull had massacred Custer and the Sixth Cavalry in 1876 tensions throughout the whole region were high. Fort Pitt was in the heart of the most volatile regions where both Big Bear of the Crees and the Metis were in a state of unrest. There was also ongoing concerns that Louis Riel who had led the Red River Rebellion of 1870 would return from self-imposed exile in Montana to lead another uprising. 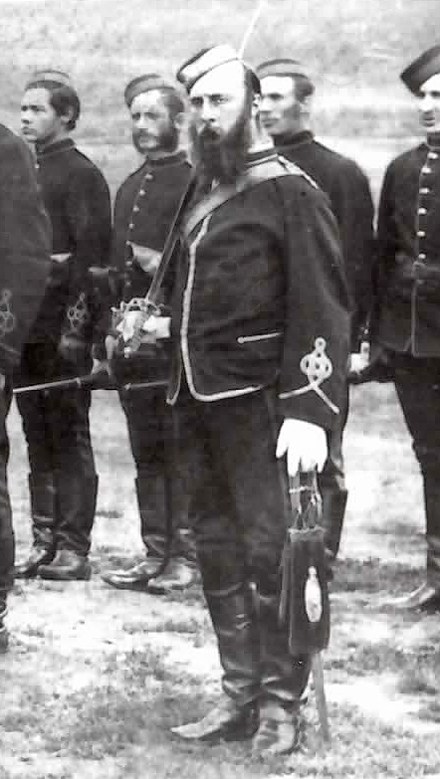 Inspector Dickens repeatedly warned of unrest in the area and in March 1885 it all came to a head with NWMP battles at Duck Lake followed by the burning of Fort Carlton then the Crees murdering priests and Hudson Bay Company employees and family members at Frog Lake. This site was 35 miles north west of Fort Pitt. Dickens sent out three scouts to reconnoiter. When they returned they were attacked by Cree warriors; one escaped unharmed, one was wounded – played dead then crawled to the ‘fort’, the other Constable Cowan was killed within sight of Fort Pitt then the warrior cut out young Cowan’s heart and ate a piece of it before the horrified defenders of the fort.

The NWMP detachment were outnumbered and outgunned 200 to 20. Negotiations led to the civilians agreeing to become prisoners of the Cree and Big Bear. The Chief gave Dickens and his men a short time to abandon the fort. This they did, and traveled amongst the ice pans in a leaky scow. Scouts from Fort Battleford reported that everyone at Fort Pitt had been massacred however after six days on the river Dickens and his men arrived at Battleford and received a hero’s welcome.

During the summer of 1885 Inspector Dickens was the Justice of the Peace who conducted preliminary trials of those involved in the uprising near Forts Pitt and Battleford. In November 8 were hanged. (Later that month at Regina Louis Riel met the same fate.)

Given his 12 years service in the North West, and the attack upon Fort Pitt, Dickens was given a medical furlough. Prior to Christmas 1885, he and an orderly escort travelled overland to Swift Current where he then traveled by CPR to Regina, Winnipeg, Toronto, Ottawa and Montreal. He celebrated Christmas in Ottawa with his new friend Dr. Jamieson of Moline, Illinois. In March 1886 he resigned from The Force due to ill health.

While in Ottawa he became friends with Dr. Alexander Jamieson of Moline, Illinois who was an admirer of the writings of Francis Jeffrey’s father, Charles. ‘Chickenstalker’ accepted Dr. Jamieson’s invitation to travel to Moline to give talks about his experiences in the Riel Rebellion of 1885. June 11 while sitting down to dinner prior to his scheduled speech, Francis Jeffrey took a glass of ice water, then clutched his chest in pain. He was escorted to an adjoining room but died of an apparent heart attack. He was 42 years old. The townsfolk of Moline made all the arrangements and carried most of the expenses of Inspector Dickens’ funeral and burial. In time a cement marker was placed at the grave and many years later a bronze plaque was attached to the original marker. 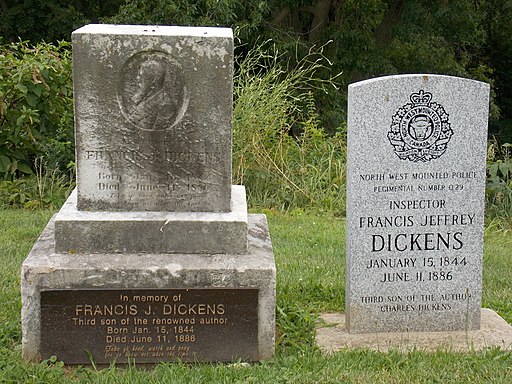 About the author of this article:  Since childhood David J. Carter has been a fan of Charles Dickens A Christmas Carol and since 1993 has been carrying out research re: Francis Jeffrey Dickens. In 2001 funds were generated (led in particular by Jean Carter and the Medicine Lodge Coulee Heritage Society) to cover the costs of an official NWMP headstone to be placed at the grave of “Our Mutual Friend” Inspector F.J. Dickens of the NWMP. The headstone was carved in Medicine Hat by Michael Anctil and has been forwarded to Riverside Cemetery, Moline, Illinois.

Mr. Carter is the author of Inspector Francis Jeffrey Dickens, of the North West Mounted Police.  This book was reviewed by The Dickensian in the summer of 2004.  The review stated, “This account of Dickens’s third son, Francis Jeffrey, and his twelve years’ service in Canada as Inspector Dickens is based on many years’ research by David Carter, an ordained Anglican clergyman and a former Speaker of the Alberta Legislature. His interesting book contains photographs, illustrations and reproduced documents.”